The following descriptions were penned in 1980 by W.Bro CH Pryce, Founder and the first Master of Cae Glas Lodge. The observant Brother will notice that these descriptions are reproduced on the Lodge’s place-mats used at the Festive Board and serve as a constant reminder of our origins.

The name ‘Cae Glas’ was chosen by the Founders as being appropriate to Oswestry, being the name of a piece of land which still remains an open space in the heart of the town, now a public park, whose fine gates are the Town’s War Memorial.

This piece of land, about 10 acres in all, was once the estate attached to Cae Glas Mansion (since demolished) which was notable for two fine pillars which stood at its front porch. The estate was sold for £6000 to the Town Council in 1910 on the condition that it would be converted into a public park, and the owner himself gave £200 towards the cost of the conversion.

Of the other Lodges in the Town, one has an Anglo-Saxon name, the other a Norman name, and the Founders thought that in view of Oswestry’s connections with the Principality, a Welsh name would not be amiss.

‘Cae’ is the Welsh name for ‘field’. ‘Glas’ may be ‘green’ or ‘blue’, so that the popular translation is ‘Green Field’. However, the student of old place names is not so easily satisfied.

In such a borderland area as this, place names frequently become distorted and their true origin obscured. For instance, the English (from a defect in aspiration peculiar to their dialect?) are unable to pronounce the Welsh ‘ll’ and substitute a ‘k’ or ‘g’. Hence ‘llais’ would become ‘klice’ or ‘glas’. The open space which is now Cae Glas stood outside the Town walls between the secular centre of the castle and town and the ancient monastic settlement of Whiteminster on the south-west side of the Town. A place where parleys or public meetings might be held.

Could it have been ‘Caer’r llais’ the field of the voice? ‘Blue Field’ is acceptable if one remembers that the famous Kentucky Blue Grass is in fact our 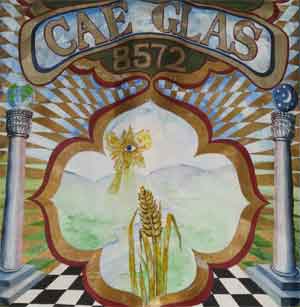 Freemasons will be familiar with the significance of the various symbols depicted on the Banner. In the centre, above the square and compasses, is shown a squared pavement in perspective flanked by the two great pillars of the Temple.

The pavement is reflected in gold above, implying the rays of the rising sun at the opening of the Lodge, and those of the setting sun at its closing.

Above the pavement we may gaze out of the Lodge, past an ear of corn. At a scene of green fields crossed by a stream, reminding us of the origin of the name of the Lodge and of the beauty of the Province of Shropshire.

In the distance, mountains remind us of Oswestry’s connections with Wales, the origin of our Province, and our brotherhood with our near neighbours.

The All-Seeing Eye is displayed in such a position in the ogee quatrefoil which serves as a window that it may observe without as well as within.

Above the quatrefoil, the name and number of the Lodge are displayed against the background of the sky as a reminder of the heights to which the members should endeavour to lift the honour and reputation of the Lodge.

We use cookies to ensure that we give you the best experience on our website. If you continue to use this site we will assume that you are happy with it.Ok